INTERVIEW WITH VALENS, SHORTLISTED FOR INDUSTRY CHOICE; AUTOMOTIVE TECH COMPANY OF THE YEAR

Thanks John for taking the time to speak with us. 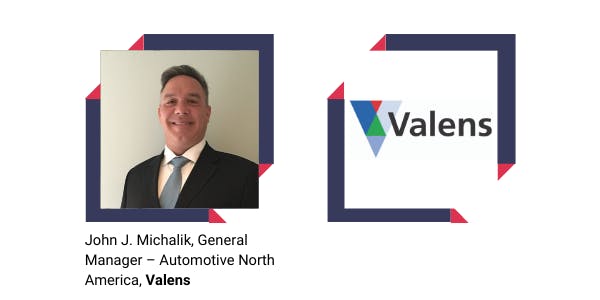 John is responsible for Valens’ activities the US, addressing the needs of customers and partners in the automotive sector.

expand_less2. Why nominate for the Industry Choice Automotive Tech Company of the year at the TU-Automotive Awards?

Over the years, Valens has brought significant advances to in-vehicle connectivity, addressing the need for highly resilient, ultra-high-speed bandwidth in the industry. In the past year, Valens Automotive technology has been recognized by the MIPI® Alliance as the most resilient technology for high speed in-vehicle connectivity, and as such it was selected to be the baseline for the MIPI Alliance A-PHY (physical layer) standard for automotive applications. The A-PHY standard will define an asymmetric physical layer for the automotive market to provide high-speed links for cameras, displays and sensors, through native CSI-2 interfaces, to support autonomous driving and other use cases.

expand_moreHow does it feel to be shortlisted for a TU-Automotive Award?

Established in 2006, Valens is a private fabless semiconductor company headquartered in Israel. The company is the world leader in HDBaseT technology, addressing the needs of the different sectors that depend on advanced digital media distribution, such as audiovisual, industrial, medical, and automotive.

Valens Automotive, a division of Valens, was established in 2015 with the goal of delivering the world’s most advanced chipset technology for in-vehicle connectivity. Valens Automotive chipset enables highly resilient, ultra-high-speed in-vehicle connectivity, converging a range of interfaces (such as audio & video, Ethernet, USB, controls, PCIe, power) over a simple infrastructure (such as a single UTP wire), for up to 15 meters.

The Power of Convergence: One Silicon, One Link, Simultaneous Multiple Interfaces